We have upgraded a Windows 10 1803 to 1809 back in June.
The end-user complained that he couldn’t launch calc anymore and his start menu looked like this:

He should have had this instead:

I’m not sure if this KB would really help because it doesn’t match what we see in the “broken” Tiles in his Start menu.

Here’s the result of the 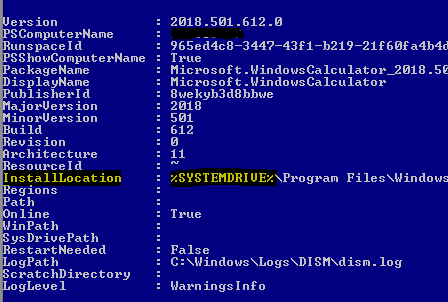 You can notice that there’s something wrong with the InstallLocation property.
That %systemdrive% is an environment variable.

I ran a procmon trace to find out what registry keys and values were being read when I run the Get-AppxProvisionedPackage cmdlet.

Then I queried what appears in these keys on his computer:

There are 2 ways to fix this. Either replace %systemdrive% by C: or change the type of the value from REG_SZ to REG_EXPAND_SZ.
Here’s a example using the REG_EXPAND_SZ way of fixing this:

This site uses Akismet to reduce spam. Learn how your comment data is processed.